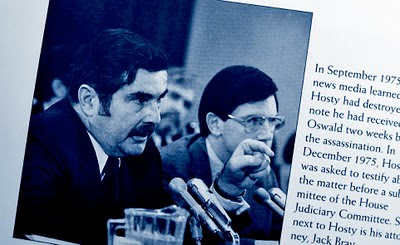 I’ve read that FBI Special Agent James P. Hosty’s book, Assignment: Oswald, published in 1996 and now out of print, offers some surprising background details on the early turbulent days of the FBI’s investigation of the Kennedy and Tippet murders. Hosty’s account spares no one in this frank description of the events and personalties that shaped the early days of the JFK assassination investigation. James Hosty does a good job at recounting the chaotic scenes in the Dallas FBI headquarters and later, the Dallas Police Department with the gaggle of photographers and newsmen, the chain smoking, coffee swilling detectives, the banging and clanging of the teletype machines and typewriters, to the short fuses of overworked men enduring sleepless nights fueled by caffeine and adrenaline.

Early on Hosty makes this sobering assessment of being in the FBI:

“With time, my idealism waned, and I accepted the hard fact that law enforcement is basically gray. I also came to understand that one of our jobs was to protect the Bureau’s image at all costs, even if it ran roughshod over individuals or principles.”

A candid disclosure to say the least. And therein, lies the problem with the FBI investigating crimes. Their approach will have political angle to it. Hosty clearly illustrates this later when his boss Gordon Shanklin, who he describes as a “damn good man” orders him to destroy evidence in the case. Not once but twice, with a third time implied. And why? So as to eliminate any embarrassment to the prestige of the FBI and hence, J. Edgar Hoover since both were viewed as one and the same at the time. It should also be noted that Hoover’s early comments immediately after the assassination were that the FBI had no foreknowledge about Oswald, but in fact, they had a file on him starting the year of his defection to the Soviet Union in 1959. They kept him under tight surveillance by the time he landed back in America in June of 1962 to just a few days before the assassination in 1963.

The Destruction Of Evidence
As stated above, when Hosty reflects that part of his job was to “protect the Bureau’s image at all costs, even if it ran roughshod over individuals or principles...” he more than prove that the destruction of a note passed to him from Lee Oswald, apparently annoyed at Hosty for interviewing his wife. As stated previously Hoover had said the FBI had no previous interaction or knowledge about Oswald–and obvious lie–and with Hosty keeping him under surveillance the note, though unsigned, becomes a problem. Embarrassing Hoover was a one-way ticket to Nowhere Land or early retirement. Hosty was ordered by Gordon Shanklin to destroy the note and the memo that went with it. And he did so. That is of course, a felony and destruction of material evidence in a murder investigation.

Which of course, makes one wonder what else they destroyed...

The second time came when Shanklin orders Hosty to destroy Oswald’s rough draft letter to the Russian Embassy in Washington, D.C. According to Hosty, Shanklin was not in his right mind from the long, stressful hours and irrationally blew up at him, demanding that Oswald’s draft and Ruth Paine’s updated copy to be destroyed. Hosty, more cautious this time, decided instead to create an FD-302 report and file the letters away in a standard evidence folder. Later, in a better state of mind, Shanklin thanked Hosty for filing it away and preserving this important piece of evidence. The second felony is thus, avoided.

The third time, implied was when Hosty was sent to retrieve evidence at the Dallas Police headquarters. This included Oswald’s wallet which will be mentioned later but more importantly, Oswald’s notebook, which featured one page with Hosty’s name, car license number, and office location in it. When he returned the items he got what he described a funny look from Special agents Shanklin and Malley. Later, he asked a colleague, Emory Horton about this, who tells Hosty they were hoping he would rip the page out the notebook with his name in it! Hosty apparently never thought of doing such a thing, nor was ever ordered to do so. Once again, more potential embarrassment for Hoover.

The destruction of Oswald note would follow James Hosty down through his career, resurfacing from time to time, and be embellished to include a bomb threat. According to Hosty, the other players in this drama, including Gordon Shanklin would be playing a game of “cover the ass.” Hosty believes that justice was served in the case since one, he never lied under oath to the WC about the note as he was never asked about it; two, he didn’t commit Obstruction of Justice because there was no pending trial or hearing when the note was destroyed; and finally, no getting him for destruction of government property as the note was not officially entered in as evidence as it was considered an unsigned personal letter.

All technicalities of course. Never the less, Hosty does admit to doing wrong in destroying the note. Even though he was disciplined twice by Hoover, which included a month’s suspended pay, he was reimbursed for it years later. In the end all he has to do is worry over it because there will be no legal ramifications from his actions.

The Origin Of The Second Wallet
Long considered a conspiracy wacko theory by the Lone Nut gang, the story of the two wallets, both owned by Oswald, which I have covered before, has its real genesis in the comments made by FBI Special Agent, Robert Barrett to James Hosty who documents the event in book. So to be clear, this doesn’t originate with nuts looking for a plot; it comes to us from law enforcement officials.

According to Barrett, he came upon the Tippet murder scene to be shown a wallet by Captain W. R. Westbrook of the Dallas Police. Barrett is asked if he knows a Lee Oswald or an Alex Hidell, which he does not. Even more remarkable is the billfold is seen being examined by Capt. Westbrook and two other Dallas Police officers on newsreel footage (no audio) shot by Ron Reiland of WFAA-TV. Interesting enough, nobody, either the Dallas Police officers present at the crime scene nor Barrett, documents this evidence find in their official reports.

The confusion builds with Oswald being arrested with a billfold on him. Two wallets? Who runs around with two on them? This leads to theories of Oswald being framed for the Tippet murder and hence, a conspiracy. Robert Barrett firmly believed the murder of Tippet was a shut case, a “slam-dunk” as he said. Why? Partly because he saw the wallet with Oswald’s ID in it at the Tippet murder site. As stated above, when Hosty is sent to the Dallas Police to retrieve evidence he signs a receipt for a wallet and he neatly writes the whole thing off as being the one taken off Oswald shortly after his arrest. The point being, Oswald already had a wallet on him. So they take the billfold from the Tippet murder scene and imply it fell out of his pocket there? I think not. As they stated at the time, the police didn’t search Oswald before they placed him the squad car and sped away to book him. It is documented that a wallet was found in his left back pocket when they did search him.

As one can see, the two billfolds does make for a confusing episode. Warren Commission supporter Dale K. Myers simply says the second wallet has “no pedigree” and “To date, the wallet’s origin and owner remain unknown.” Another defender of the WC, Vince Bugliosi, in the End Notes to his book Reclaiming History simply concludes that the errant wallet is Tippets. But that is not what SA Robert Barrett told James Hosty! The Dallas Police officers seen handling a wallet on film–they never said it was Tippets. And besides, Tippet’s wallet is documented to have been found with his belongings at the hospital. The last known person to have the wallet in hand was officer Westbrook. After that, it’s lost in the fog.

Other Revelations, Tampering of a Personnel File
Probably Hosty’s most interesting revelation is that his own personnel file was tampered with containing altered documents to make him out to be derelict in his duties. After an internal investigation of Hosty’s handling of the case, Gordon Shanklin and Jim Malley questioned Hosty about what he knew, typed it up and placed it in his file. Years later when turned down for a promotion he inquired about it and found out that he had been blacklisted by the second in command of the FBI, Clyde Tolson (Hoover’s roommate). After he got access to his file, he found to his shock that the answers to the questions had been changed to make him look at fault and negligent in his investigation of Oswald. Hosty had wisely made a copy of the original questions and answers. He also photocopied the new documents that had been altered. He has no proof but speculated it was Shanklin and Malley that made the alterations.

In Closing
James P. Hosty is like a lot of guys. Your average, honest working stiff that starts out gung-ho and then runs into the Wall. Where politics crush justice, truth, and morals. The Long Knives arrive to stab you in the back for the things they did. That’s why Hosty remarked, “I also came to understand that one of our jobs was to protect the Bureau’s image at all costs...” and he flung head-long into it when things transpired to embarrass Hoover who punished him in certain ways, unjustly.

There is a lot of irony here too. Hosty take his swipes at the “conspiracy buffs” for coming up with nonsense involving the assassination but his focus is narrow. He only centers on his end of it and the work he did. He seems to have no other interest in areas that conflict with the official account as revealed in the Warren Report. He goes along with it all being a Company Man. Yet his account of the machinations of his fellow FBI agents behinds the scenes, being ordered to destroy documents, his own personnel file being tampered with containing altered documents to make him the fall-guy, is one broad reaching account of conspiratorial activity. How then, are these men to come to an honest investigation into the death of the President? Or for that matter, in our century, when the September 11 attacks occurred? Can we ever trust these people?

Assignment: Oswald makes a good addition to any researcher’s library. James Hosty’s frank account of his experiences as an FBI agent, warts and all, is an honest and down-to-earth account of those early days of the Kennedy assassination. 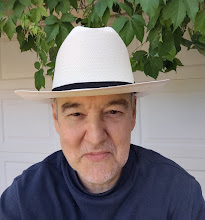 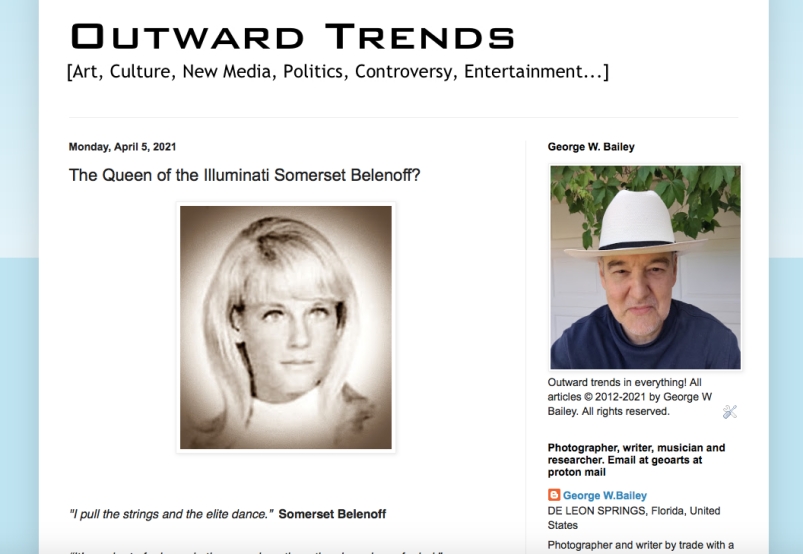